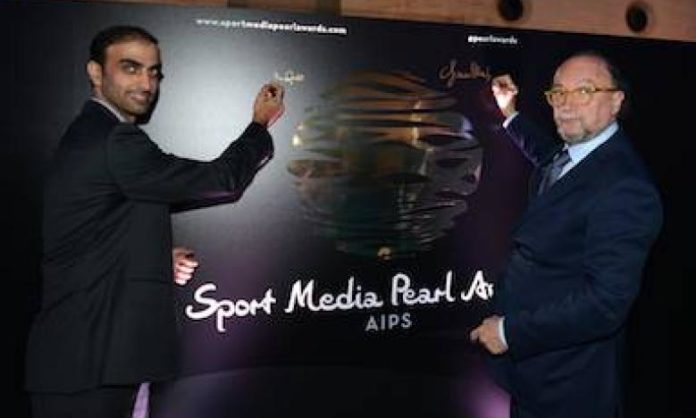 A new milestone in the world of sport journalism was at the Louvre Museum in Paris with the launch of the Sport Media Pearl Awards, managed by the International Sports Press Association (AIPS) and hosted by Abu Dhabi Media (ADM).

The awards stand to recognise the work of everyone behind the scenes, the sport industry’s ‘hidden soldiers’; shedding light on what they have been doing to keeping sports the international language spoken by all. Abu Dhabi Media is no stranger to focusing on sports through its diverse platforms making it one of the fastest growing multi-platform media and entertainment organizations in the Middle East.

Commenting on the announcement, H.E. Mohammed Ebraheem Al Mahmood, Chairman and Managing Director of Abu Dhabi Media said: “Abu Dhabi Media is pleased to host the Sport Media Pearl Awards. The partnership with AIPS comes in recognition for the important role sport journalism plays across the globe. As a leading media organisation, we see it as our duty to acknowledge and support those who deliver exceptional reporting to the public, and foster an inspirational dialogue.”

“The awards represent a new platform for the celebration and development of sport media excellence among key industry practitioners and enthusiasts across the globe,” he added.

AIPS President Gianni Merlo said: “These Awards are very important, because in a difficult moment for our profession it is necessary to return the spotlight onto the value of our work. Sport means culture and these awards will help the public recognise the social value of sport journalism.

“It is especially significant for our association that the awards were announced in Paris, the birthplace of AIPS the peak body representing the international sports media, founded 90 years ago at the 1924 Paris Olympic Games.

Sports recognition tends to be confined to athletes and players, leaving sport media professionals – those who mediate the exciting world of sport to the ordinary enthusiast – under-appreciated. The Sport Media Pearl Awards will be open to print and web journalists, radio and television reporters, photographers and videographers recognised by their National Sport Press Association (Luxembourg: sportspress.lu).

Freelancers will also be able to submit their entries on the awards website and only entries published between September 1, 2014 and August 31, 2015 will be considered.

The awards recognise and reward quality, innovation and originality in sport storytelling. The annual event will be held in December this year in Abu Dhabi, the capital of the UAE: Abu Dhabi is a cultural nexus point between East and West, where global sporting traditions and influences converge.

Winners in eight specified categories will receive a special trophy and a cash prize of 10,000 USD. The first and second runners-up in each category will also be invited to attend the awards ceremony in December and will receive 1,500 USD.

A special award will also be introduced for coverage of a social project involving a sporting initiative aimed at bettering the lives of the less fortunate or marginalised. The Sport for a Better World Award will carry a prize of 10,000 USD for the media professional in question and a 50,000 USD donation to the enterprise or project that is the subject of the winning coverage.

Final awards will be judged by an expert panel of 11 senior professionals from the sport media industry, under the chairmanship of the AIPS President and including also a nominated special Ambassador of Sport. The Jury will base its decisions on nominations put forward by a panel composed of the AIPS Executive Committee.

Entries will be considered from new media as well as traditional platforms in the following categories:

(i) Athletic Prowess – An image that best depicts a moment of breathtaking sporting excellence and achievement.

(ii) Emotion – An image that best captures emotional impact on those engaged in sport or spectating.

(i) Best Column – A piece that best demonstrates relevance, knowledge and authority in the field of sport writing.

(ii) Best Colour Piece- Writing that best captures the emotion and sense of occasion of a sporting event.

This category will recognize the best produced sports news/documentary/programme in audio format.

Open to all sports media professionals engaged in producing content based on capturing the moving image in sport.

(i) Documentary – A video that tells a compelling and revealing story about any aspect of the world of sport. (ii) Action sequence – A video that captures in a short sequence the spectacle, energy, dynamism and spirit of a sporting achievement

This will reward an individual who has been able to engage, sustain and grow a web-based community around sporting discussion.

6.Sport For a Better World

A special award dedicated to coverage of a social project involving a sporting initiative aimed at bettering the lives of the less fortunate or marginalized.

Not open to submissions, these awards will recognise those who deserve special recognition in the world of sport media

(i)A life In Sport – A lifetime recognition award for a professional who has demonstrated unique passion, commitment and expertise in his or her chosen sport media field

(ii)Investigative Reporting -The award will recognize an investigative report or series that identifies and explains and/or exposes topics or issues in the world of sport judged to be of public interest.

(ii)Best App – An app that best informs and engages a loyal fan base relating to a particular athlete, sporting event or organization. __

Abu Dhabi Media (also known as ADM) is one the fastest growing multi-platform media and entertainment organizations in the Middle East. Established in 2007, ADM operates and manages more than 20 market-leading brands across various broadcast and publishing platforms. Abu Dhabi Media is the only organization that covers the entire spectrum of the media industry by providing content that informs and entertains the local community. www.admedia.ae

About The International Sports Press Association:

Alexia Putellas and Lionel Messi elected as 2022 AIPS Athletes of the Year: As voted by 113 countries, including Luxembourg